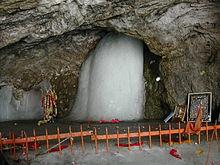 Inside the 40 m (130 ft) high AmarnathJi cave, the stalagmite is formed due to freezing of water drops that fall from the roof of the Holy Cave on to the floor and grows up vertically from the Cave floor, That is considered as “SHIVA LINGA”, picture of “SHIVA LINGA” depicted above has been taken form WEB. Camera is not allowed inside the Temple. 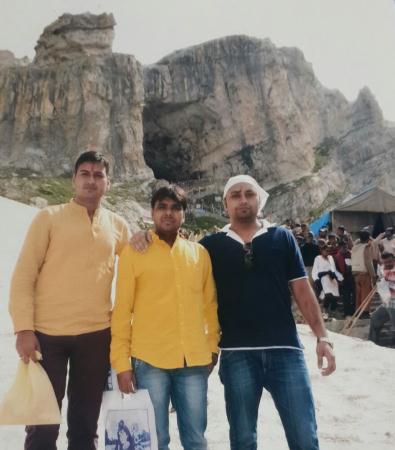 It is said, this is The Cave which was chosen by Lord SHIVA for narrating the secrets of immortality and creation of Universe to Maa Parvati ji, therefore no living being can listen it. It is believed or might be mentioned in any of the Vedas or other holy “GRANTHAS”, while travelling to Amarnath Cave via Chandanwari, he released Moon from his hairs, that’s how the place is known as “CHANDANWARI”. 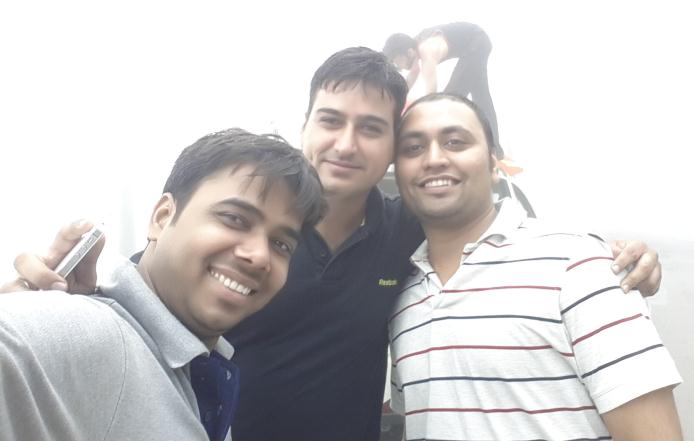 He left his Nandi (The Bull which He used to ride) at Pahalgam (Bail Gaon) previously the place was known as “BAILGAON”.  At the banks of Lake Sheshnag he released the snake afterword this lake was renowned as “SHESHNAG LAKE”.  He decided to leave his Son Ganesha at Mahagunas Parvat (This top is known as “MAHAGUNAS TOP”). At Panchtarni, He left the Five Elements behind (Earth, Water, Air, Fire and Sky) which make living being, being the reason called as “PANCHTARNI”.

A prospective map consisting all these places has been included below with photographs, It has been matter of fact that a pair of pigeons was alive their when Lord Shiva narrated that Amar Katha, and afterword it became immortal, without discussing more about facts ,myself with my both of YATRA companions witnessed this pair of Pigeons in cave. It is said that people see them rarely. The Cave is huge enough and made of corrugations of stones, pigeons can’t be located if they don’t fly to places inside Holy cave.

It is talked that after the Middle Ages, this cave was forgotten by people before it was discovered by a Gujjar shepherd in the 15th century once again.

The ancient epics narrate another story:  The valley of Kashmir was under water. It was a big lake. Kashyap Rishi drained the water through number of rivers and rivulets. In those days Bhrigu Rishi came that way on a visit to The Himalyas. He was the first to have Darshans of this Holy Cave. When people heard of the Lingam, Amarnath for them became Shiva’s abode and a Centre of pilgrimage. Since then Lacs of devotees perform the pilgrimage through tough terrain and avail eternal happiness.

Every year in month of July- August yatra opens for pilgrims.

There are five options; you may adopt any of them to reach up to the Holy Cave as described below. Nearest Airport is Srinagar and Nearest Railway station is Jammu.

Note: Wherever there is option of “Walk” is shown, PITTHU can be hired. It is available from specified locations.

After de-boarding the trains at Jammu railway station get ahead to bus stand. Public Transport is rare to travel up to Pahalgam, you have to hire or share a private taxi it charges approximately 700 to 1000 rupees maximum per head. It would take 8 to 10 hours to reach up to Pahalgam depending on traffic and road conditions. If you are lucky enough there would not be raining or landslides which would enable you reach within time.

(A Mega project of central govt. is being executed of four lane high way form JAMMU to SRINAGAR, it would be completed in coming years consist of dozens of tunnels under hills. It would make life easier and would reduce this travel time with remarkable safety.)

By the evening you would reach to Pahalgam, after a security check you are able to stay in any private cottage / hotels or public Tents (base camps). Tents cost you very reasonable and offer all facilities.

Next morning journey starts form Pahalgam, you may take chopper if already booked or wish to go by walk/Pitthu than take a taxi to Chandanwari, it 16 Km from Pahalgam. From Chandanwari it takes approximate 32 Km to Cave. Try to start as early as possible from Pahalgam, you can travel until sun sets, Base camps are located at Sheshnag Lake and Panchtarni only.

If you cross the Sheshnag before 1400 Hrs than only allowed going ahead otherwise it becomes mandatory to stay at Sheshnag Base Camp. Any how you may reach to Panchtarni by hiring PITHHUS, Weather is unpredictable, any time it may rain and can hamper your journey so better to keep going being punctual. It is highly recommended not to spend time in lingering around. By the evening you reach to Panchtarni and hire a Base Camp (Tent).

Starting very early in morning can save you from a big hustle, its worst path you ever imagined and mostly one way covering 4 Km over the Icy and Sandy hill. A huge traffic which gets on increasing as the day progresses. You may need to be in queue for a long. After all you reach to the Sangam Point where path form Baltal connects and Cave is 3 Km apart. After Darshan you may return by same path or by Baltal path.

Base Camps are also available at Baltal, Big Constellations adopt via Baltal, and it is approximately 15 km to Cave. But if it is raining it becomes dangerous. Its sandy and gets sleepy, number of Steep ups and downs with one ways at several points on the way when get mixed with mud  becomes rear to walk along.

Previous bookings of Chopper are required if you wish to go by, Chopper are routed to Panchtarni, Previously Chopper were allowed near to Cave but now it has been aborted. Chopper drops at Panchtarni. From Panchtrani to Cave you have to go by Walk or Pitthu. Same happens if you travel by Chopper from Pahalgam or from Baltal.

You need to seek a permit for Yatra, Registration form are available in PNB and J&K bank approximately 60 days previous to when Yatra starts in July. You need to undergo a medical test and test report is submitted with filled in form in mentioned banks thus you get a permit. 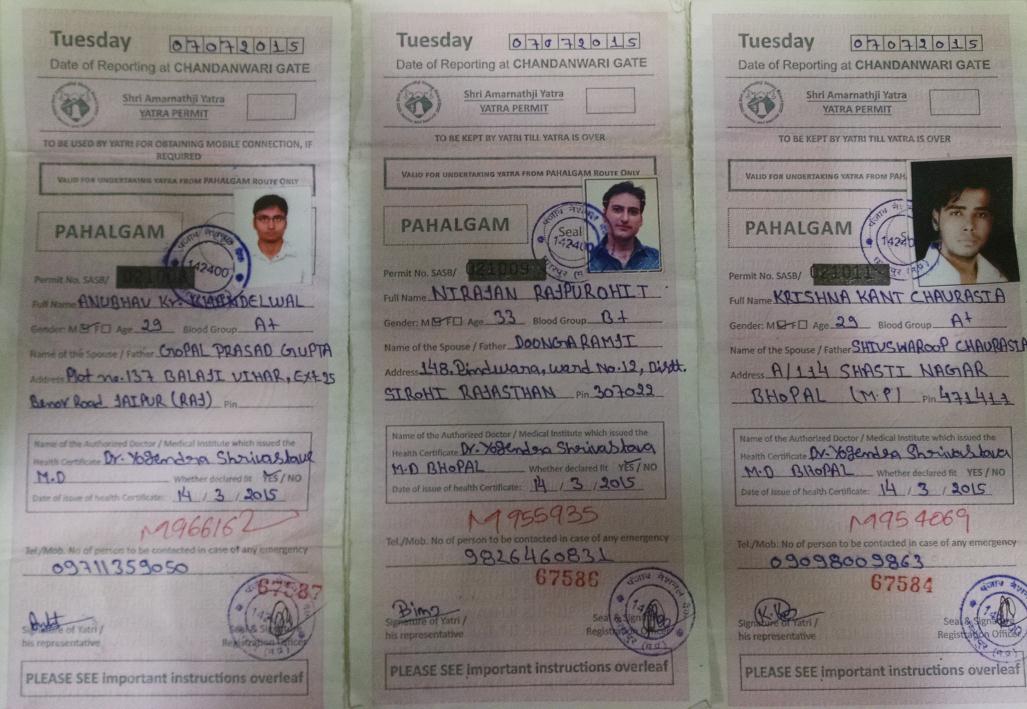 You need to fill in form whether you would travel via Pahalgam or via Baltal and the day of entering at these locations. And same gets reflected on your permit. No one is allowed to travel without permit and or with Pahalgam permit via Baltal and vice-versa.