Sorabh Pant is a name one usually associates with stand-up comedy. But when one of India’s most successful comedian pens a piece of fiction, it’s hard to resist the temptation to read such a book.

Under Delhi, is simply a brilliant story and deals with a serious social problem and still makes for a hysterical read. 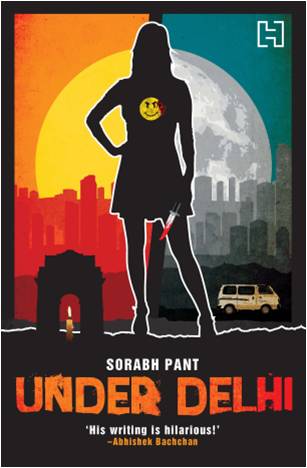 Luckily enough, I was able to manage an invitation to the book launch event . As Sorabh read out an excerpt from his debut, the audience applauded with appreciative and uncontrollable laughter. Instinctively, I got my hands on a signed copy of the book.

Coming to the theme of the book, the author mocks the criminals who commit sexual offences (not to use the R word) against women and employs a female vigilante as the protagonist of the story to deliver justice and exact revenge on such criminals.

The story is set in urban Delhi where such sexual offenders are in plenty and they manage to escape justice with abundant money to throw around. And then enters our protagonist, Tanya with a demented sense of humor and her own weird way to scout and punish her prey.

While she is personifying Rani Lakshmibai/Joan of Arc (whichever you prefer) in the wee hours of the night, she also deals with a pathetic excuse for a job, her pervert of a boss, her screwed up romantic life and a traumatic past that refuses to leave her alone.

In the midst of all this, she meets her nemesis, Ramesh Gill, a worthy and cunning vermin of a person who’s opulence keeps the law at bay. The story then unfolds with her struggle against the seeming unending power and deception of her nemesis.

All throughout the story, the author has imbued a sense of humor which makes for a hilarious reading and keeps the reader amused at all times.

Tanya’s fight with different facets of the story is just gripping and she is portrayed as a true champion of justice, self trained in defense and adept at inflicting physical pain on these not-worthy-of-living individuals. It does seem like story worthy of a movie audience as well.

All in all, the book is highly recommended for a hilarious and thrilling read centered around a taboo theme.