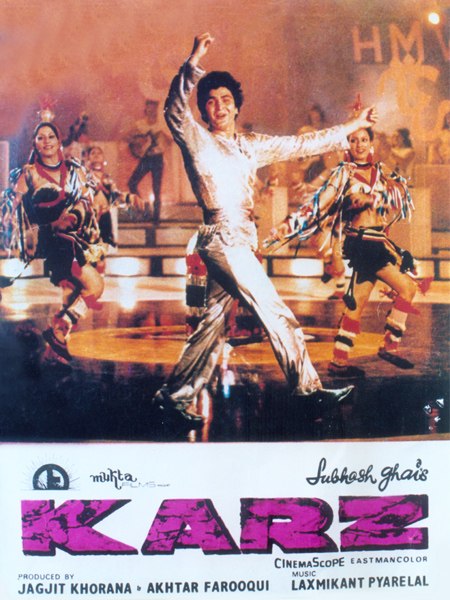 Ravi Verma (played by Raj Kiran), a wealthy man is getting married! His fiancée, Kamini (Simi Garewal), however has conspired against him by aligning herself with his father’s erstwhile business partner. Their plan – kill him and get their hands on his wealth. The successful execution of this diabolical plan plays out in the first few minutes of the movie. Fast forward a few years, Ravi Verma is re-born as Monty, an orphan raised by a businessman who milks his talent for singing for his monetary gain. During one of his performances, he subconsciously plays a tune Ravi Verma played and this triggers memories from his past life.

Events lead to his arriving at the same place where Kamini now lives. The surroundings which were home to him in his previous life intensify those memories. He puts together the pieces of the puzzle with the help of Kabira (played by Pran) and they plan on how to exact revenge on Kamini and others responsible for Ravi’s death.

Karz has all the elements of a masala movie. Romance, drama, some action, a villain without scruples, a wronged family, and a noble young man fixing it all and tilting the scale in favour of the good. The running length of 2.5 hours is interspersed with peppy, foot tapping numbers like Om Shanti Om, Paisa Yeh Paisa, and Dard-E-Dil. The theme music (the tune played by Ravi and often repeated in the movie) and Ek Hasina Thi are slower tracks and will stay with the viewer long after the movie is over.

This movie is a wholesome entertainer and is fun watch when staying in on a hot summer afternoon. Draw the curtains, prepare a large bowl of popcorn, and soak in the revenge-romantic saga starring Rishi Kapoor, Simi Garewal, Pran, Pran, Premnath, and Durga Khote.