“What makes you happy?” is probably the most common question which each of us come across numerous times in different stages of our life. Answers can be varied and solely individual specific, based on priorities, preferences and goals we set ourselves in different times. For some, it can be “Buying a new car or an immovable property”, “Son or daughter’s feats” or it can even be one’s own career objective which one could achieve with satisfaction.

In next few lines I will be talking about “What makes me happy” or rather “What makes us (My family) happy” in real terms. In my family, we three distinctly different individuals in our preference for food, dressings and outlook in life, have surprisingly one thing in common, our love for forests and its flora and fauna. Time is a major constraint for planning a family trip ,as frequently as we would like to, but we still manage to make few short trips, between my daughter’s semester breaks (If your offspring aspire to be a medical practitioner, be warned , there is nothing called “Breaks” in that five and half year’s grinding and then after).

Here is one such trip excerpts from our safari diaries for all like-minded vacationers who can afford disconnection from their mobile networks for few days.

We have been to at least ten tiger reserves so far (some of them more than once) across different states for a glimpse of not only big mammals but to experience the beauty and silence of the jungle with its other inhabitants. Corbett with its pristine, untouched scenic beauty stands out, when we compare it with the other ones. Travellers going for a jungle trail must plan the trip meticulously well before to avoid missing out any part of the adventure. Like every time, this time also I have reserved in advance, in one of the forest rest houses deep inside Corbett.

The specific trip I am describing now, was our second to Corebett and we stayed in Dhikala Zone Forest rest house which is almost one and half our drive from the gate and close to the Dhikala core zone. Day safaris are not expected to take this route because of the stipulated time frame one is allowed inside and each gate entries are restricted to a specific route by rule. Dhikala forest rest house is a colonial era architecture, amidst lush green vegetation, by the side of Ramganga river which flows through the entire stretch of Corbett Bio reserve. 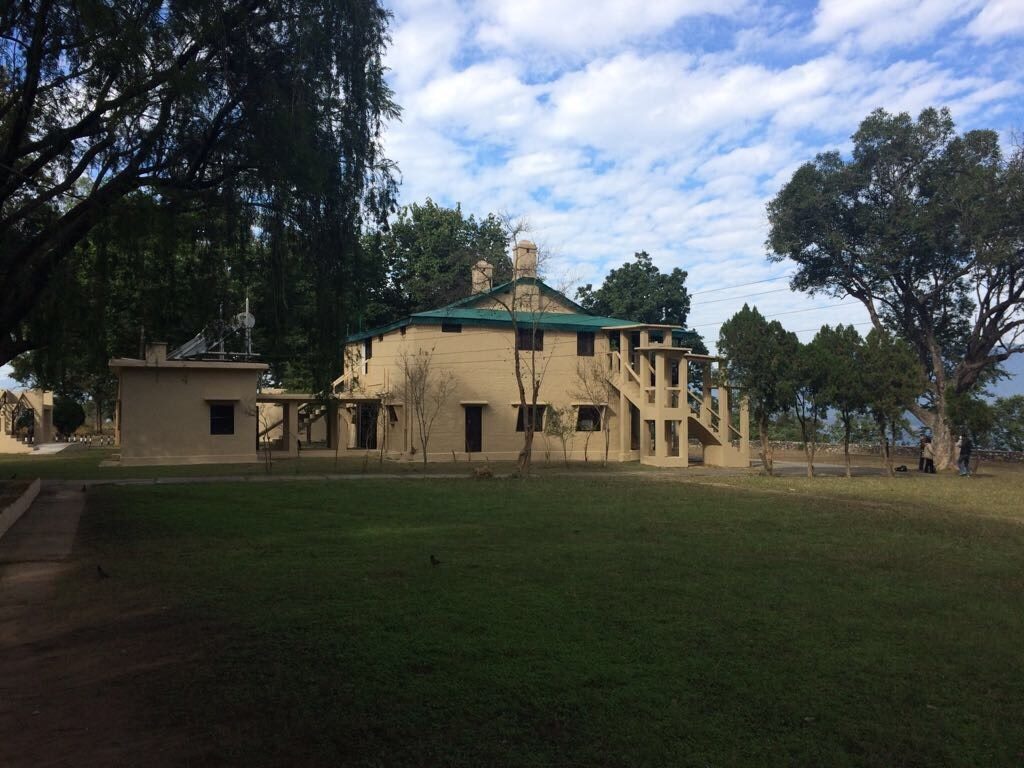 As usual we were ready by early morning at 5:00 dressed in our olives for the morning safari and Naser (our tour Guide for next three days) was ready too on the wheels with a welcome smile. Spotting wildlife in early hours, especially if one can reach before scores of other jeeps arrive, is a preferable option on all jungle safaris. Tracking fresh pug marks on the dirt track, following the deer “Calls” and obvious warnings by langurs parched high on trees, is no less exciting than spotting an animal on its track. Abundant patience and maintaining pin drop silence is the key, if you are actually a wildlife fan. We were extremely lucky to spot a tiger cub in its childish playful mood just across the stream in a grassland, exploring the surroundings with caution. My wife’s camera with its long lenses was abuzz with hundreds of clicks as it was the first time we could see a tiger cub. We waited for an hour to spot its mother but with no luck. The lady was probably on a shopping spree for her weekly ration somewhere nearby. Another round of near-miss chase for the elusive tigers continued for next few hours before we exhausted our morning safari time of three hours. Usual round of breakfast and lunch was quickly finished as the next evening trip was due to start at 2:30 PM. Within hours of starting our evening safari we spotted a king cobra, coiled below a ‘Shal’ tree. Serpents are most unlikely to be spotted in the second half of the day as they tend to return to their nests after mid-day in a jungle environment. We waited in silence for the megastar (at least 12 plus feet in length) to raise its head for a perfect photoshoot but again with full belly, it was in no mood to walk the ramp and we had to leave it in its sleep in search of other wildlife. Tracking continued again for some time before our jeep screeches to a halt. A herd of elephants, consisting of small calves and their overtly protective mothers, came out from one side of the road, moving slowly towards the marsh land near the lake, crossing the road in front of us.   Naser reminded us of our previous encounter with a charging, solitary bull elephant during our last year trip. Hence, we maintained a 150 m safe distance from the herd and watched a fifteen minutes march past. Our day ended with few consolation of large herds of Chital, Sambar, relaxing after a daylong grazing, a clear sign that no predators are around. 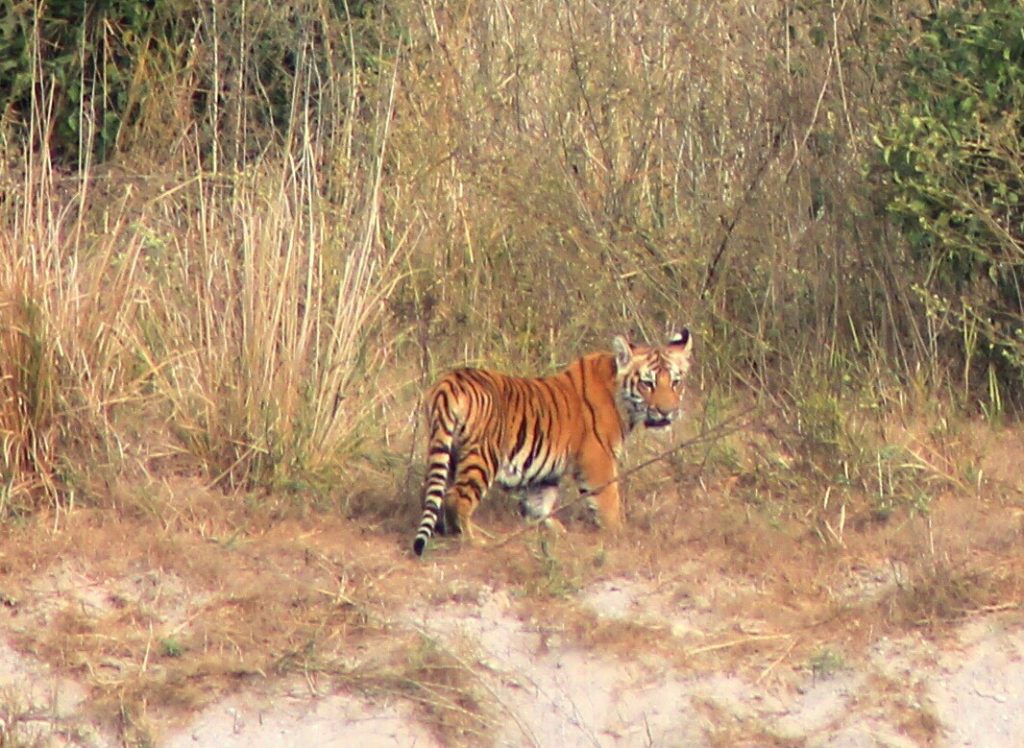 After returning back to the forest rest house, we were requested to shift to a different room to accommodate a top political dignitary. Never the less we resigned for the day after the buffet of rice, roti, sabji (Forest Rest houses are no five start accommodation so please be prepared for the basic amenities with limited food menu. After all you are there not for sauna but for your love for wildlife). Entire Dhikala rest house is electric fenced as wild animals hardly have any sense of political or administrative demarcations. Entire moonlit night we spent with occasional piercing sound of tiger roars and elephant trumpets from distant corners of the approximate 520 sq km core zone of the reserve.

A pleasant surprise was awaiting for all three of us in the next morning trip. Within half an hour of our trip we spotted a big male tiger crossing Ramganga river towards our side of the bank almost through the same grassland where we found the loitering cub all alone, day before.

Male tigers are known to kill cubs if it is not of their own, a rude jungle fact. 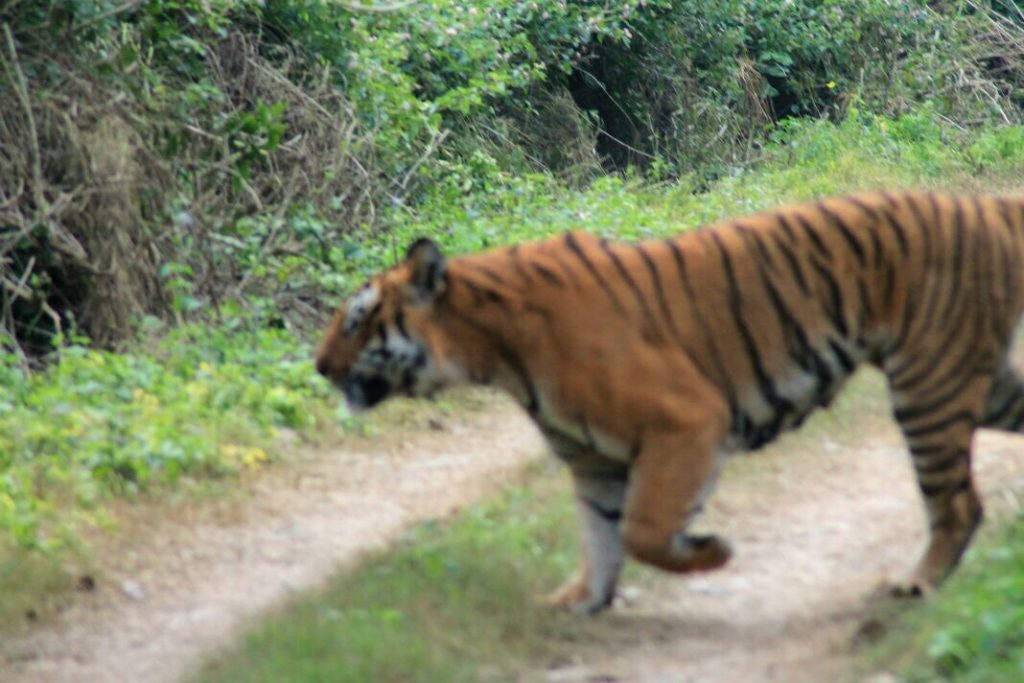 He was visibly upset by our presence and shown its protest with continuous growl which can send chilling sensation down the spine if it is from a tiger of that size from a striking ten meter distance of an open jeepsy. Trembling fingers were proving difficult for a close-up camera shot. Naser rebuffed our idea of following it with our jeepsy on its track , as his experience told him not to disturb a male tiger when it is already agitated, consequences can be dangerous. We reluctantly allowed the big guy to quickly disappear in the thick vegetation but his growl could be heard for quite some time, warning us for any misadventure. Rest of the morning trip went off without any major encounters and mostly photographing different bird species in different parts of the reserve, so is the evening one, except the fact that we could see a leopard completely relaxed, seated on the ground, which is quite unusual in a tiger country. 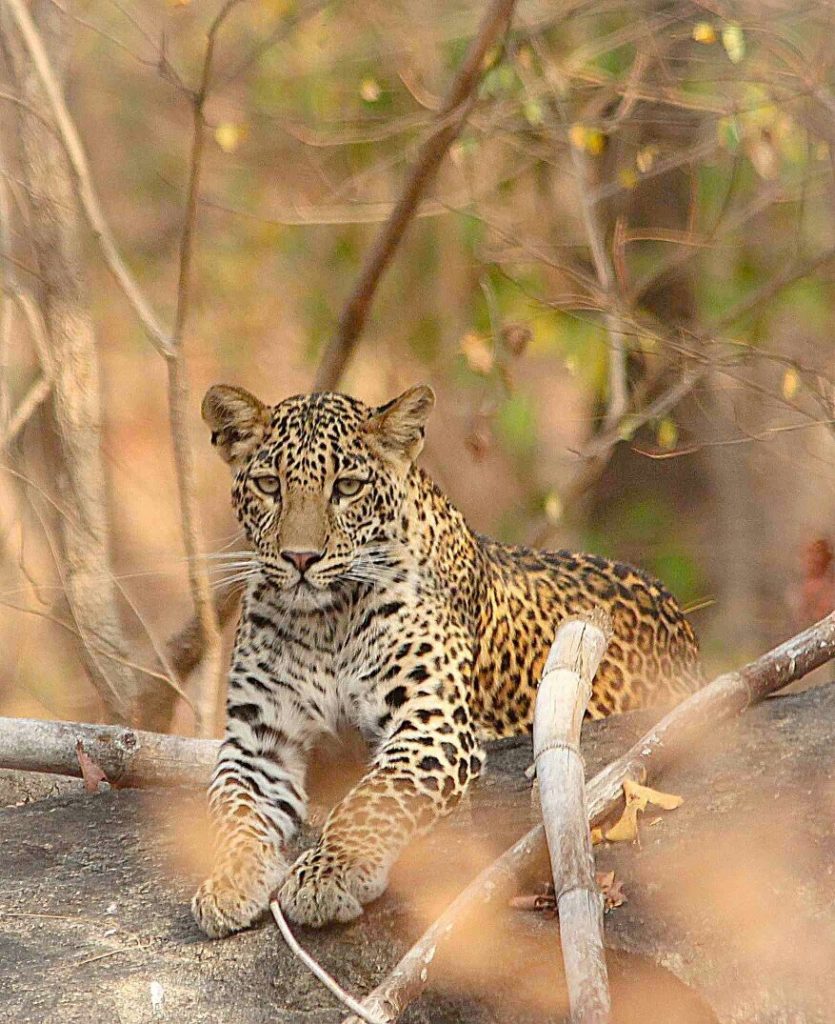 Tigers kill leopards occasionally as both of them compete for the same prey.

Knowing the fact that almost all tiger reserves are under immense human habitation pressure and slowly reducing to a size when it will become unsustainable for most of the big cats to survive. Till that time, enjoy it to your heart full, as we always do.

Next day we had to bid goodbye to Corbett and return to the concrete world. Every time, while returning we plan for our next visit to another tiger reserve in some other part of India. Knowing the fact that almost all tiger reserves are under immense human interference and it is becoming unsustainable for the big cats to survive, we want to spend more and more time with the wild creature.

This travelogue will not be complete if I do not share few “Already” known safari tips “once again” for you. 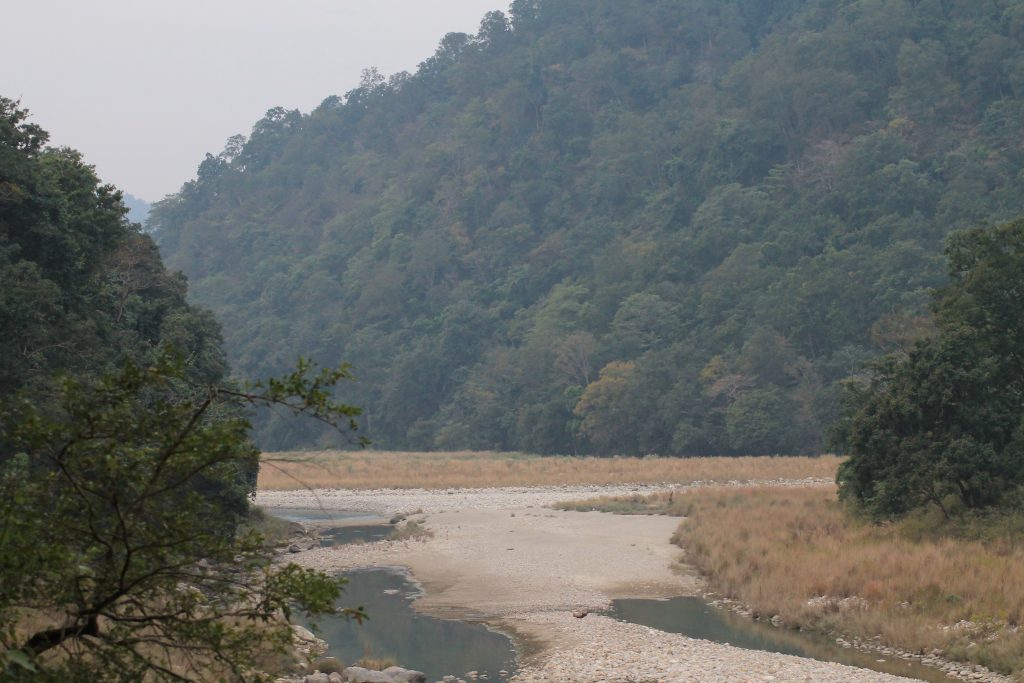