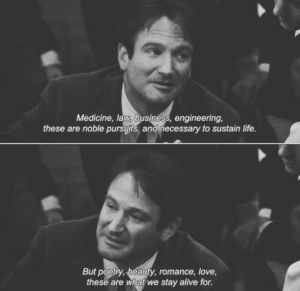 There are some films that, if you watch them for the first time, have the capacity to inspire and stir some memories of your past experience: Dead Poets Society is one such film. It is uncynical, idealistic and vulnerable, even though the film wasn’t well received amongst the film critics, however it received audience appreciation. It has been voted the greatest school film and it is often recognised by viewers as one of the most inspirational films of all time.

In this film, the late Robin Williams plays one of the big screen’s most influential schoolmasters.
John Keating (Williams) is an unconventional educator who tears chapters of his textbooks and asks his students to stand on their desks to see the world from a new perspective and uses the power of literature to open his students minds. Based off of a teacher who had taught Oscar-winning screenwriter Tom Schulman. It is set in Vermont in 1959 in Welton Academy, an elite private boys school. And the way Keating introduces his students to poetry, and his free thinking attitude have a profound effect on his students,
especially Todd (Ethan Hawke), who would like to be a writer; Neil (Robert Sean Leonard), who dreams of being an actor, despite the objections of his father; Knox (Josh Charles), a hopeless romantic; Steven (Allelon Ruggiero), an intellectual who learns to use his heart as well as his head; Charlie (Gale Hansen), who begins to lose his blasé attitude; unconventional Gerard (James Waterston); and practical Richard (Dylan Kussman). Later from Keating’s first few lessons, Neil and other students are inspired to create the “Dead Poets Society”.

Unlike other films related to drama, this film has a lot of dynamic camera movement.
To me, the stand-out scene is the one in which young student Todd is challenged in front of his class by Keating to create poetry. Reluctant at first, he slowly starts uttering rhymes as Keating encourages him with vigor and enthusiasm.
This scene is captured by a truly dynamic camera, directed by cinematographer John Seale. The camera rotates around its subjects, Keating and Todd, slow at first, then speeding up, until the background is reduced to a blurry mess of fast moving lines and we solely focus on Todd’s face.That movement is so dynamic and engaging it literally pulls you into the emotion of the character.
Dead Poets Society is an idealistic film and it’s hard not to feel a wave of affection for Williams when he recites to his students the lines:

‘Gather ye rosebuds while ye may/
Old Time is still a-flying
And this same flower that smiles to-day
To-morrow will be dying.’

Carpe diem. Seize the day. Treat yourself to apiece of inspirational cinema