Climbing steep hills for fun? Sounds exhausting! Who does that on holiday?

Yeah, that’s exactly how I used to see trekking before. That is, before I got married. Now, my spouse has wheels under her feet and wings in her mind and a hunger to explore the unexplored terrains; and fortunately, I got infected by that.

Both of us yearned for the wilderness. To experience the thrill of scaling the hill, to stand among the pine trees and get soaked in the cloud, to gaze down at the green valley lying beneath – well, the internet is to blame, but not that we are complaining.

So we got on to it. Being beginners, we were searching for some suitable and short treks (as we didn’t have the luxury of time), and finally zeroed on to Nag Tibba Trek. We booked the trek through Adventure Nation. I won’t get into the particulars but let’s just say we don’t have anything negative to say about their arrangements. It was a smooth sail throughout the trip.

The total trek consists of 2 days. Day 1 consists of reaching Pantwari village from Dehradun via car and then trekking the Nag Tibba Hill to reach the basecamp, then rest for the day. Day 2 consists of waking up at an ungodly hour and setting off for the peak, then trek back to basecamp, having lunch, and trekking back to Pantwari village. Sounds easy peasy lemon squeezy, right? Nope.

I’ll skip the mundane parts, save for the important information that Adventure Nation arranged pick up from Dehradun station and transportation to Pantwari village on the saturday we decided to take the trip and vice-versa. From Pantwari village we started the trek. It’s just walking up a slope, how hard can it get?

With every step, the ascent got tougher. Even with my seven years of experience in climbing stairs in supercritical boiler I was completely overwhelmed. The terrain changed every second, and most of the times for the worst. Only with unfaltering attention we were able to avoid any impeding injury. Bottles of water emptied by the hours; we actually had to ration it carefully to utilise throughout the whole climb. There were several fountains to refill our bottles; and honestly, we had never before tasted such fresh and energising water, and never hence. The other sources of energy were chocolate bars and fruits.

In times it felt we just could not go on, let’s just sit here and take rest for hours – which we were being repeatedly advised against by our guide. Laboured breathing, racing heart, physical strain unexperienced heretofore – and yet we trudged on, totally thanks to Adrenaline! But what was the fuel? The ever-changing terrains! The satisfaction in overcoming the difficulties, the thrill of experiencing nature from up close, the exhilaration from gazing at the other mountains while standing in the lap of one – we were alive! Thus, we climbed. 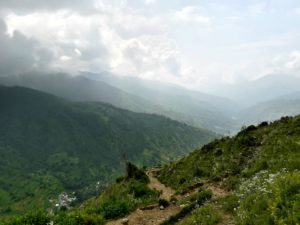 On the way to Nag Tibba Base Camp

We took a lunch break around 2.5 hours into the trek. Simple homemade food – roti, sabji and achaar, never tasted so good! It took us around 4 hours to reach the basecamp. And when we did, it was every bit like the dreamland we wished for – a little green grassy valley with a view of the green mountains ahead, and clouds as our neighbour. The whole atmosphere was just mystic and surreal. All the pain we took, all the efforts we put – those were all worth it. 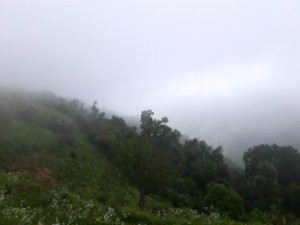 The Mystic atmosphere of Base Camp 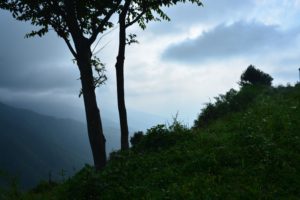 The hospitality we received there was beyond expectations. Every possible convenience was provided as per their full capacity. A nice spacious tent, with extra mats to enjoy nature from the outdoors housed us. We had a nice evening snacks and tea outdoors; shared some with a very gentle local dog too. Afterwards, popcorn and coffee, along with a beautiful bonfire and antakshari with a couple of other trekkers made it an evening to be remembered for the rest of our lives. Here are we, at the lap of a mountain, under a starry sky, sitting with complete strangers around a bonfire in darkness, singing away merrily. Surreal, once again! 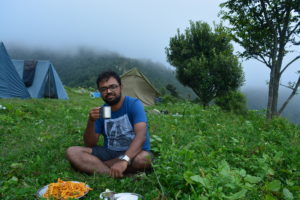 Snacks on top of a mountain 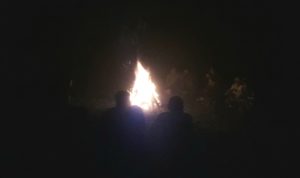 The dinner was also spectacular, complete with fruit custard as dessert. Went to bed early because as per our guide’s instruction we were to leave at 5 a.m. the next day. Seemed unreal, but we knew we had to, so we complied.

Yeah, 5 a.m was impossible to be achieved; however, we did start our trek shortly after 6 a.m, no small feat for us newbies still. It was still dark when we set in. One important lesson we learnt – do not trust google search results for weather conditions in hilly areas. Prior to the trek we had gotten an idea of around 4 degree celsius from google search, and came prepared likewise. Barely 10% of the warm clothes were ultimately utilised. We realised trek itself is quite the body-warmer; well, the temperature was not that cold too though.

In this leg of the trek the change of scenery was quite stark compared to the first leg. Before we had mostly been treading on rocky trails lined with shrubs and bushes. But then the ground became soft with patches of shed leaves, bushes were replaced by tall trees, and the harsh sunlight was replaced by trickling rays of light through the leaves. Overall, the journey became much easier and more fun. Just our lungs and hearts remained the same – overworked.  Sometimes the track was quite treacherous, but thankfully we didn’t have any accidents. We didn’t have any complaints though; after all,  it was our dream to walk through a mountain trail winding through the tall trees, where the sun shines in thin rays and we breathe in clouds – we were living that dream during this trek. 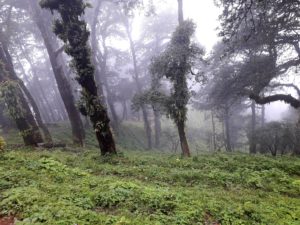 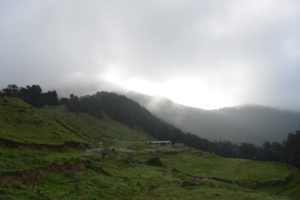 Midway to the top – A Valley

Having reached the peak, we did experience a certain level of satisfaction, but it was nowhere near the exhilaration during the journey. Although, the view of the tumbling waves of clouds beneath us and the imposing green mountains before us was nothing short of heavenly. We loitered around for about 20 minutes, clicked photos, and then started our descent. 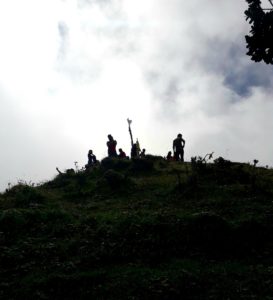 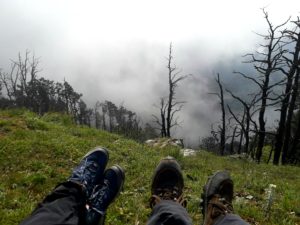 I must say, we never expected the descent to be equally taxing as the ascent. Just the nature of the adversity was different. Instead of our lungs and hearts, our joints from knee down took the brunt of the suffering. Honestly, I will never forget the ache. Just like the blissful experience of the journey it was also something we encountered the first time in our lives. I was literally wincing in pain with each step. Our desperation to sit and rest was even more intense than before, but time was against us and so we had to limp on. Although we did get some lime soda as refreshment about halfway down the trek along with about 20 minutes of rest – the respite was short-living.

When we finally reached Pantwari village, our legs were ready to give way. Sheer willpower held our bodies upright and moving. After freshening up in a nearby hotel we were transported to Dehradun station – a 3 hours’ journey. When we finally boarded our train and dragged ourselves to our berths, we literally succumbed to sleep within seconds. And that would have resulted in a very nasty surprise on the next day had we not got awakened by a stray comment stating that our train has reached Hazrat Nizamuddin station. Such exhausted were we that we couldn’t feel the train pulling up into the station.

So, we returned from the very first trek of our lives, with loads of ache and even much more wonderful memories. The ache faded away in about five days, but the memories remained, and will remain forever in our hearts. So I guess the tread off was quite good.

Do we want to experience the same pain? Hell no! Do we want to go on another trek? Hell yes! Once we do, I will come back with another tale to tell. Until then, stay healthy, and enjoy life!

Very nicely written Sagnik. Quite elaborate and could totally feel what you experienced there through your writing.