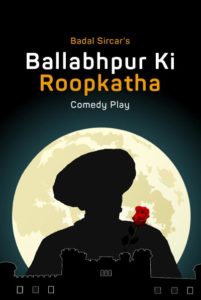 One often witnesses jam-packed movie theatres or sports events, but a full house at the enactment of a play is unheard of.  The portrayal of the play “Ballabhpur Ki Roopkatha” at the LTG Auditorium in New Delhi was one such occasion.

Written by the Bengali playwright, “Ballabhpur Ki Roopkatha” is based on the ancient history of the city of Ballabhpur. The story revolves around the protagonist, Bhupati Rai,  a debt-ridden owner of a 400-year-old palace.  Bhupati, having borrowed from every single person in the city has no recourse but to sell his palace to settle the debts.

But, easy as it seems, Bhupati has been not able to find a single buyer for the palace. And this is where the story takes a dramatic twist.

The palace is HAUNTED.

Inspite of the circumstances, Bhupati is eventually able to locate a willing buyer.  A masquerade is fashioned to dazzle the buyer and extract a hefty price from him for the sale. What ensues thereafter, is utter chaos and a comedy of errors.

The play has all the elements of comedy, suspense and modern-day drama.

The artists were skilful and flawless in their portrayal of the characters, so much so, that the audience was totally immersed as if the play was unfolding in their lives itself. The acting made the situational comedy hilarious, and the acts were so memorable that even weeks after the play, I am still able to recall them as if they happened yesterday.

I’ll leave you with few questions to ponder on to entice you to watch the play.

Will Bhupati be able to make a successful sale?

Will the buyer come to know of the ghost?

To find out, go watch a rendition of Badal Sircar’s “Ballabhgarh ki Roopkatha” as soon as you get a chance to.